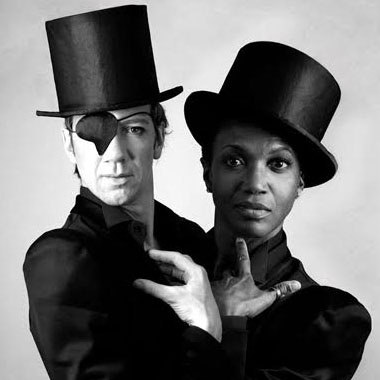 Claron McFadden (New York) & Sven Ratzke (Amsterdam) take us into the Berlin of the twenties: In a bizarre world of dubious figures and establishments, in an atmosphere pervaded by the smell of cigars and brandy..

Inspired by Brecht and Weill meet opera star Claron McFadden and Sven Ratzke, the enfant terrible of glamour cabaret. At the meeting of these thoroughbred artists, their energy turns into fireworks when they hit the stage! A visual kaleidoscope of dazzling images begins to turn: light and shadow, illusion and reality in a metropolis filled with whores, jugglers and villains …

Virtuoso, peerless and with great desire to break in style McFadden and Ratzke create their tragic but cheerful characters. Supported by four great musicians they seduce their audience with an exciting exuberant mix of theater, opera, jazz and musical theater.

Ratzke expressive and McFadden masterful. A crackling evening, full of virtuosity and surprises.Theaterkrant *****

In this production, everything is right. Chemistry between McFadden and Ratzke is so large that it is believed they were real-life lovers. ‘Penny Blues’ bursts with virtuosityNRC Handelsblad *****

Lightning fast switching between German, English, French and Dutch, they awaken the rough shards quarter milieu to new Life Claron McFadden and Sven Ratzke with great gesture and voice. Whether opera diva, actress, pimps or the doll with sultry whisper – they all have their place in this grandiose and theatrical presentation. Equally important is the proportion of the new arrangements.  They rearranged Weill’s score and breaks through the sometimes mechanical simplicity of the original.De Volkskrant *****

The wonderful new arrangements lift the music from the thirties to the here and now and McFadden and Ratzke use their entire vocal performances in all its aspects. A event!De Standaard, Antwerp *****